The Mouth in the Oval Office 2: Impeachment and the Liar-in-Chief

The headline for the article by Peter Baker in The New York Times (December 10, 2019) caught my eye: “In a Swelling Age of Tribalism, the Trust of a Country Teeters.”

I started reading and came to this:

Most Americans tell pollsters that they do not believe what he says, but a significant minority consider him a truth-teller in a broader sense, saying out loud what others will not, even if he does not hew to particular facts.

I read that sentence through a couple of times.

Yes, it is quite true that Donald Trump is untruthful more often than not. His lies, distortions and dissimulations arrive at the speed of tweet and impulsive expostulation. As of October 14, 2019, according to The Washington Post, “President Trump has made 13,435 false or misleading claims over 993 days,” which is to say he has spoken untruthfully more than 13 times a day since his inauguration. That was 67 days or at least 871 “false or misleading claims” ago. 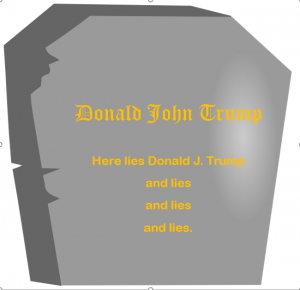 In our house we memorialize that mendacity with our own homemade meme:

I struggle with that “tribalism” with family members faithful to the cult of Trumpublicanism. I cannot for the life of me understand how anyone can champion his presidency given this torrent of lies on matters both inconsequential and grave, especially when they agree that “Trump is untruthful.”

Mr. Parker put his finger on it, though. Trump’s supporters don’t care about his lies because they imagine he articulates a higher truth. The facts on which Trump, his minions and supporters trample are irrelevant to them because they place articles of faith above demonstrable fact.

This terrifies me because it also explains the push in this country toward a theocracy that the Founders sought explicitly to prevent. Why are so many Christian Evangelicals and other fundamentalists committed to Trump? Because they believe that Trump is doing their god’s work. They believe, contrary to the historic record, that the United States was established a Christian nation subject to Christian doctrine, a doctrine they regard as “law.” The amorality, even criminality, that Trump learned at the knees of his father Fred Trump and his attorney Roy Cohn makes no difference to the president’s cultists because the ways of their god are mysterious, ineffable and beyond human understanding.

When people allocate all power to a deity, they relieve themselves of all responsibilities. If Trump was chosen to be president by their god, then Trump is also that god’s prophet and representative on earth. That clearly suggests that Trump, like the Pope in Roman Catholic dogma, is infallible. If he is infallible, then his will must in all cases be obeyed. 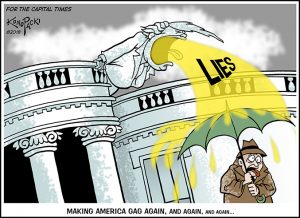 In the west, empirical fact has largely triumphed over theological truth for at least three hundred years. Monarchs who ruled by divine right have abdicated their thrones and ceded much if not all of their power to secular and comparatively democratic authority. Modern lawmakers have had to apply reason to social and cultural conventions to enact enforceable legislation.

Trump—delusional, narcissistic, indifferent to notions of right and wrong, infantile in his sense of omnipotence, and cruel in the schadenfreude that consumes him—is the charismatic demagogue against whom Alexander Hamilton warned the emergent republic. Trump is the essence of corruption that the Founders agreed posed a singular threat to the survival of the new nation. Trump is what many of us recognize as an existential threat to the ideals of our Constitution that are advanced through the rule of law.

That the Founders’ fears were well justified is evident not just in Trump’s disdain for his oath of office but for the willingness of the GOP in general to place the protection of their despot above the defense of our nation. 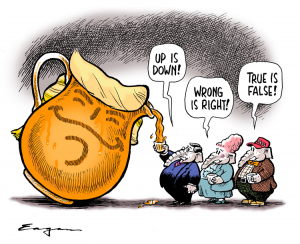