The Mouth In The Oval Office: Our State Of The Union 2020

No, Donald Trump. The state of our union is not strong. You have demonized for three years the voters in 2016—a majority of all who turned out–who thought that anyone other than you would be an infinitely better choice. You have lied incessantly and knowingly in order to undermine the stability of facts and the possibility of truth. Remember when you admitted that you made up facts about the trade deficit with Canada in an official exchange with Prime Minister Justin Trudeau?

Richard Nixon, opined to television interviewer David Frost, “When the president does it, that means that it is not illegal.” You have gone further and tried to enshrine that untruth in the Constitution, asserting “Article II allows me to do whatever I want.”  It doesn’t of course. It doesn’t liberate you to shoot someone on Fifth Avenue in broad daylight. You should not feel it encourages you to promote racist violence and countenance police brutality. It certainly does not permit you to invite foreign agencies to meddle in American elections on your behalf. 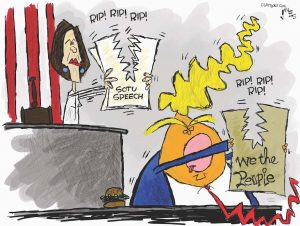 Ripping Trump A New One

The State of the Union Address

The State of the Union address is the annual message required by Congress from the President. Originally it was a written report. In 1913, President Woodrow Wilson spoke directly to the assembled members of Congress. In modern times, certainly since I started watching the speeches in the around 1970, presidents have but the best spin on the previous year and the work they and their appointees and supporters in Congress have done. It is what one expects. I have frequently found their claims specious and dubious, but I have never before sat in my living room and screamed out “You lie!” Rep. Joe Wilson (R) of South Carolina did that to President Barak Obama on September 9, 2009, when Obama addressed a joint session to outline his proposal for reforming health care. I know shriek the same words in my mind every time Donald Trump speaks and tweets.

You, Donald Trump, see the SOTU address only as the bully pulpit that amplifies your lies. For whatever reason, members of the GOP continue to claim that your words can be believed and your basket of deplorables appears to truly believe that any and all of your utterances can and should be trusted. 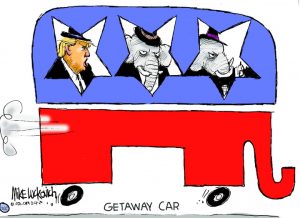 As I listen to the final speeches before the vote in the Senate leaves Trump in office, I have that sick feeling I had in 2016, long before the election. I am wrapped in that consuming darkness that befell me when the voice on Morning Edition on NPR announced that the Trump had indeed won the election. I hear myself saying “fuck, fuck, fuck fuck, fuck…” and knowing that despite my husband’s consolation that “it will be okay,” it would not be okay, and it hasn’t been okay. Or even just bad. It has been horrifically, unimaginably, devastatingly destructive to our country, to our social fabric, to our environmental health, our economic stability, and our faith in the decency and integrity of government itself. The Trump administration, both the official one and his covert surrogates operating in Saudi Arabia and Ukraine, have destroyed the international alliances that offered at least some possibility of a hopeful future. 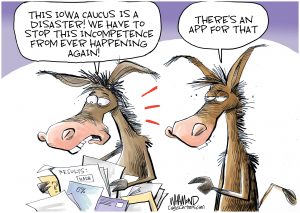 There’s an App for that!

All of this is making me sick at heart, worried that a poor voter turnout will drive a Republican victory in the electoral college and guarantee Trump coronation as “Dear Leader” or “Führer” or “President for Life.” Sick that the rule of law and the commitment of the Constitution to democratic ideals has been entombed by the GOP. 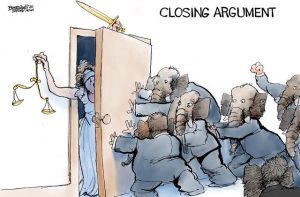