A few days ago I responded to a post on a social media asking who would be part of the “blue wave” in November. I answered in the affirmative, that I would vote for whoever ultimately won the democratic nomination, even if that candidate were my last choice in the primaries. 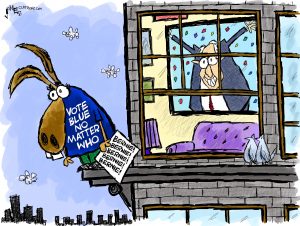 Vote blue no matter who?

A fellow poster commented on what I wrote. (These are her words as she wrote them.)

…I am not a no matter who vote blue voter. I will vote for Democrats up and down the ballot but not for drunks, idiots or those who have no business representing people. I will not vote for Bloomberg or Biden they think like rich old white men. My preferred candidate is Elizabeth Warren. She is smarter than any of the other candidates and has values I respect. She understands the constraints placed on women that destroy their lives. Wall Street fears her and Bloomberg is running to keep her from winning…She will not listen to oligarchs…

I think Elizabeth is a stellar candidate myself. But if I end up stuck with Biden or Bloomberg or someone else I don’t like in November. I will at least vote against Trump by holding my nose and voting blue…

My words did not move her.

If the DNC with their pressuring ways pushes either of these on the rest of us like they did with Hillary I see no hope for this country… The DNC is more republican than all the pre-Reagan presidents… I hate Rich People. All of them. They don’t believe in sharing the wealth.

And there you have it.

“I hate Rich People. All of them.” 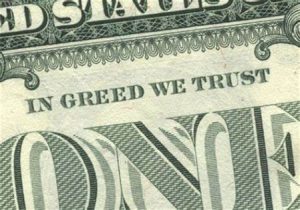 In Greed We Trust

These are the feelings that carried Trump to the Oval Office. So many people who had suffered so much believed two things: they believed Trump cared about them and felt their pain; they believed that as a “successful” businessman, that Trump would create wealth for them apparently as he had minted for himself.

Trump’s success, of course, was that of any con man or politician: he persuaded people that he was telling the truth.

Yet those Trump voters—and the woman who engaged in that conversation with me—have a point. The greatest obstacle to their economic and social advancement is systemic. The system benefits people already solvent enough to buy a home, live in an excellent school district, pay a manageable amount for comprehensive health insurance and funnel savings into the stock market through retirement and brokerage accounts. The same system mediates their ability to advance along any of those fronts. For people of color, the system is weighted even more heavily against them.

Blaming rich people—certainly rich white men—as the source of so much poverty, such limited opportunities and entrapment at the bottom of the American economic hierarchy is to dangerously oversimplify the problem. Having a scapegoat, though, takes some of the pressure off. Among Trump’s singular accomplishments has been to create categories of scapegoats for every tonality from the brightest scarlet through vivid violet to midnight blue: immigrants, people of color, welfare recipients, jobs sent overseas, regulations that protect the environment, high taxes, low taxes, bad schools, bad parenting, inadequate health care, racism, inherited wealth, the one percent and more. 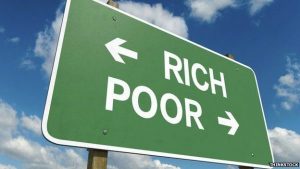 This election—and a Democratic victory–will be about whether there can be a consensus of humanistic imperatives that joins us together rather than debates on who is to blame.  It will be about collaborating to find solutions and determining ways to implement those solutions.

I cannot relieve my correspondent of her hatred for the GOP, the DNC, white men and rich people. I can confirm, however, that she is right on one thing. If we cannot find a way to make it possible for all Americans to share in the wealth, if we cannot rebuild the middle class and offer fully accessible stairways out of poverty, then I too see no hope for this country.