Corona Virus Diary 7: The Cure For What Ails Us

We all know the six symptoms of COVID19:

I know the symptoms, certainly. Yet, even though it is my sixty-eighth pollen season– my car is green with dust and the elbow of my sleeve damp with snot—I at least ask if I am picking up a virus any time I sneeze. Any virus. If my Dear One chokes on a sip of something that went down the wrong way, I look and listen to see if it is a cough or “a cough.”

I wasn’t thinking about the pandemic more than usual yesterday, however, just about the annoying floaters in my eyes. They had created problems as I tried to read the morning paper and then abated—or at least I didn’t notice them in particular while I was transferring the contents of my bank account to Perennial Farm in exchange for a carload of plants. Despite the blustery cold, I went out after and stocked up on dirt and mulch. Then I retired to the couch with a glass of wine and Henry Adam’s excellent Eakins Revealed: The Secret Life of an American Artist 92005).

And the floaters were back.

This time they seemed less like prismatic flashes of light and more like agitated amoebae sliming my field of vision in the left eye from about twelve o’clock back to three o’clock. I could also feel a suspicious tenderness in my third eye, the ajna chakra directly above the bridge of my nose. As soon as I became aware of it, I could feel it increase, like a jackhammer or accelerating locomotive.

It was a migraine, and I hadn’t had one of those in years. I knew I had a few pills somewhere that a former doctor had prescribed way back when. I found them. Sumatriptan. Expiration date 08/2012. Took two anyway and headed directly for bed. Not too sure what time it was; mid or late afternoon maybe as the sun was pretty bright. After a while, maybe an hour or so, my Dear One came up to check on me. He brought me an Oxycodone which neither of us were sure would help, but what the heck.

As I waited for the narcotic to kick in, I started wondering if a violent headache might be a new star in the constellation of COVID19 symptoms. I tried to think about where I had been fourteen days ago, what I had touched, whom I had encountered. Through the throbbing and nausea, I tried to figure out when fourteen days ago even was.

I tried, in my darkening room, to understand the implications of falling victim to the pandemic. Not only would I be really sick—and that would be very unpleasant—but if I was infectious, my Dear One would get sick, much, much, much sicker than I. In fact, he could die. We both could die. The house is a mess and it will take a team of estate archeologists months to get everything sorted out. No, our dying was simply too much of an inconvenience to put people through, I decided in my delirium.

The pain abated slightly. I slept for a while, woke, slept, woke and slept, finally rising around six-thirty a.m. I felt okay. The milky tea and piece of cherry ricotta cake I had for breakfast tasted good.

My migraine was over although this season of COVID19 is not. 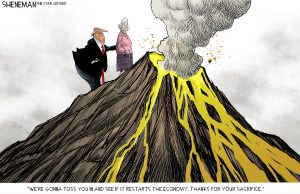 Thanks for your sacrifice.

The Nature of Sacrifice

Dying, it still seemed to me, would engender countless problems. This is not, however, a view shared by the President of the United States, who tweeted on May 8 that,

American shops want to open! Hair needs cutting. Demokraps don’t want to bite the bullet but that’s the price we have to pay. Some oldies will have to die. We’re in God’s hands, folks! Liberate America? 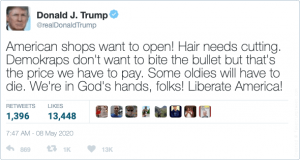 Let me see if I have this right. There are a bunch of buildings on Main Streets agitating for the right to be open, and strands of hair in search of scissors? The price we—all Americans, presumably, and not just “Demokraps”—have to pay to for this is the sacrifice of our elders. “Some oldies will have to die.” Apparently the deity whose hands are pulling the strings is partial to blood sacrifice. If we as a nation make this sacrifice, we will succeed in liberating American from…what exactly? Will we be liberated from health? From life? From the survival of beloved friends and family?

This oldie, though, still has enough wits to wait until the president and his cultists have paid that sacrifice themselves before I offer myself up on the altar of Mammon. After you, President Trump, after you. If your “God” would be pleased with us common oldies, just imagine how tickled he’d be if you, the President of the United States and the Mouth That Would Be King led the procession.