A while back I received a cryptic email from one of my brothers, J.

I have some information that is very important for you to hear.  I am pretty sure you won’t like it but your health depends on knowing what I now know.  I’m giving you this initial heads up to see if you want to have this conversation over the phone or via email or not at all.

I assumed he had received some kind of diagnosis that could have implications for siblings. My sister P told me last fall that in addition to the eye problems and diabetes I knew she had that she also has kidney disease. Serious bummer. These ailments, particularly macular degeneration, glaucoma and diabetes, are at the top of my health paranoia list.

Of course I wanted to have that conversation on the phone and not via email.

It turned out to be something of a nothing-burger from my point of view. J spoke in slightly ominous generalities but not of issues that made much of a dent in my awareness. We also chatted about the boat that has become his home and this and that.

Some of his comments nagged at me, however. A subsequent Facebook posting that landed the artist Marina Abramovic, Dr. Antony Fauci, Hillary Clinton, Bill Gates and Warren Buffet all in one giant devil-worshiping, child-abusing heap disturbed me. It sounded QAnon. 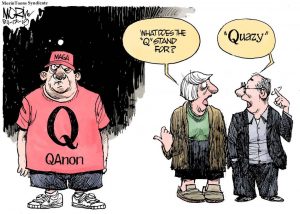 Crazy talk. But then J has talked crazy before, like about aliens populating the earth. When does crazy shift from ambient white noise to widely held fantasies that genuinely endanger society?

Then came the posts on his FB feed that talked about the Great Awakening and his new “business associate,” Sean Morgan, and the podcasts they were hosting. The first Great Awakening was a religious movement in the Colonies in the 1730s and 1740s, driven by an obsession with punishment, hell and the end of times. The conversations J and Sean were having were no less apocalyptic in tone and fantastical in claims. It no longer sounded like QAnon. It is QAnon. J’s obsession was not all that recent, either. On a comment dated April 17, he said that he had discovered QAnon in 2017.

My brother who has always occupied the political ground of the radical left and proselytized the gospel of environmental protection, social liberation and other liberal ideals, has moved into the quicksand of extreme conspiracy theorists. He is aligned with those who see Donald Trump as the savior who stands between them and a satanic cabal who push vaccinations that kill. Vaccinations, moreover, are a ruse for Bill Gates to implant us all with chips that allow us to be followed, controlled and killed.

Really. It’s not as though we hadn’t already voluntarily chipped ourselves with those communication devices we keep constantly at hand. When a few of his FB friends expressed their disagreement with J’s new dogma, P rallied repeatedly to his defense.

For many years, our sibling foursome has do-si-doed in various configurations. Our father died in 1965, muting whatever movements he might have called out. Our mother spent most of the sixties in McLean Hospital and each of us knew her mental illness in a unique way.

P and I were occasionally close but often riven by sibling rivalry. (I am second in the birth order with P leading and J and T respectively following me.) T is godfather to her elder daughter and I am godmother to her younger daughter. At times I was very close to J, at times a neighbor, good friends with his ex-wife, a doting aunt to his three boys.

T is the one who knows best how to push my buttons and that has made me leery in the past—but all that is in the past. Now T and I chat on the phone for good reasons and for no particular reason. We do favors for each other with pleasure. We share reading recommendations and enjoy vigorous debate.

These days T and I spend a lot of time trying to make sense of QAnon and how J went from a bright but loopy thinker with a very good heart to an active participant in one of the ugliest cults ever to thrive in the fertile soil of this country’s freedoms. 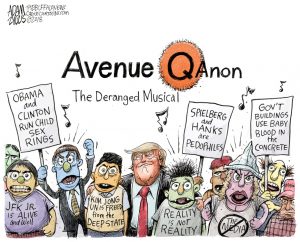 Yesterday, as I gardened at the edge of the forest, weeding around some ferns and contemplating perennials that might do well in that bit of woodland garden, I thought about J, about T and our last conversation, about what I had extracted from an article in the current issue of The Atlantic on QAnon and the lure of conspiracy theories. My mind went back to that email. When exactly had he sent it?

The date on the email is 23 March 2020. COVID-19 was exploding across the country. Governors and mayors were closing schools and businesses, ordering us to shelter at home and wear masks when out in public for any reason. Soon Trump would be tweeting in support of “liberationists” armed with automatic weapons who were threatening chaos at State Houses where governors placed protecting lives over the right to get a haircut, a tattoo, hang out at a bar or attend sporting events.

This country, already cemented into partisan camps, has found reinforcement for those divisions in the pandemic. One hundred thousand Americans are already dead. Forty million jobs have evaporated. Suffering is a competition pitting those who have sickened and died against those who can’t pay rents and mortgages, feed their families and continue with their educations.

Why are we battling each other instead of the virus and human catastrophe?

My ionized sibling group has split into two atomic structures with opposing charges. Another casualty of the Age of COVID-19 may well be my family.