Corona Virus Diary 16: Shards in the Eye, Ice in the Heart 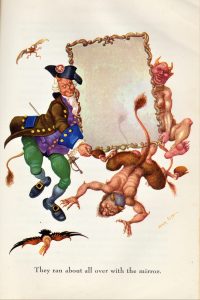 One of my favorite books when I was a child—one of my cherished books still—is a collection of stories by Hans Christian Andersen. “The Snow Queen: A Tale in Seven Stories” was one of the most ghoulish and frightening, and one of my favorites.

A demon “invented a mirror with this peculiarity: that every good and pretty thing reflected in it shrank away to almost nothing. On the other hand, every bad and good-for-nothing thing stood out and looked its worst…If a good thought passed through anyone’s mind, it turned to a grin in the mirror, and this caused real delight to the demon.” The pupils in the demon’s school carried this mirror around the world until “at last there was not a country or a person which had not been seen in this distorting mirror.” Ultimately, the mirror slipped from their hands and shattered on the earth.

Some of these bits were not as big as a grain of sand, and those flew about…getting into people’s eyes. Once in, they stuck there and distorted everything they look at, or made them see everything that was amiss. Each tiniest grain of glass kept the same power as that possessed by the whole mirror. Some people even got a bit of the glass into their hearts, and that was terrible for the heart became like a lump of ice…The bad demon laughed till he split his sides. It tickled him to see the mischief he had done.

The narrative continues with two children, dear friends, Kay and Gerda. Kay gets a fragment of this glass in his eye and suddenly and violently turns against Gerda. Ultimately Kay falls into the deathly grasp of the Snow Queen. Gerda, in an effort to save him, faces a series of terrible challenges that are met only through extreme self-sacrifice and the power of love. In the end, Gerda embraces Kay who “sat still, rigid and cold.”

Then little Gerda shed hot tears. They fell upon his breast and penetrated to his heart. Here they thawed the lump of ice and melted the little bit of the mirror which was in it… Then Kay burst into tears. He cried so much that the grain of glass was washed out of his eye. He knew her and shouted with joy. 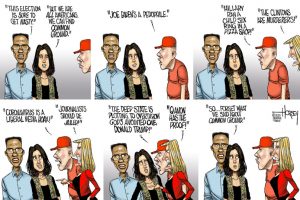 This tale returned to me as I struggle to understand how my brother J could sink so willingly into the quagmire of QAnon. How could he disseminate the poison of those conspiracies, fomenting paranoia about our government, destroying the credibility of our elections and stoking partisan hostilities? Why would this brother I thought both loved and liked me suddenly turn on me with vitriol? Why would he take such pleasure in making statements he intended would wound me.

Out of the blue J’s ex-wife M—mother of his three sons—messaged me. I had not seen her since the wedding of son #3. What was going on with my brother, she wanted to know.

Then the bombshell fell. Or perhaps the mirror smashed. 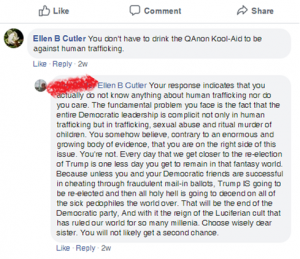 It wasn’t just what was going on with J. He had taken son #3 down the rabbit hole with him. #3 provided M with links to strange sites and incomprehensible videos. He went nuclear on her when she didn’t agree that Bill Gates was trying to microchip us all. Nor did she think a cabal comprised of Dr. Fauci, Hillary Clinton, Warren Buffet and nearly every known liberal or Democrat trafficked children. None of us thinks that Donald Trump dedicates his life to stopping this presumed alliance.

We talked at length. I sent her the article on QAnon published in the June Atlantic magazine. 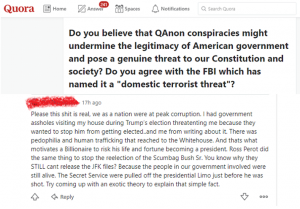 The lies and the language that QAnon provides is the stuff of cults, of Jim Jones and the Branch Davidians. My friend Dr. U called me and quoted various patients who questioned her beliefs and cited Donald Trump as their medical authority and political guru. The words they spoke, the claims they made, are the same same untruths and phrases that pepper J’s Facebook and Twitter feeds.

Dr. U received the article on QAnon published in the Atlantic, too.

Mother Jones magazine asked the question, “Why are Right-Wing Conspiracies so Obsessed with Pedophilia?” fully a year ago. It’s a good question that links today’s QAnon cultist to conspiracies all the way back to ancient history. It also illustrates the medieval and anti-rationalist mindset in which today’s conspiracy theorists are mired. 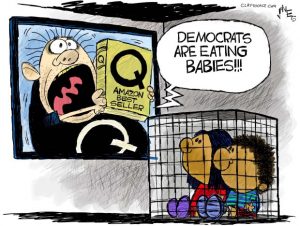 Are democrats are eating babies?

The New York Times has published articles on such conspiracies; it recognizes them as a genuine threat. No longer is QAnon merely some “fringe group of conspiracy-minded zealots.” Neither are they a laudable “protest movement born of frustration with a corrupt, unaccountable elite.” For me, QAnon is an expression of hatred, a gleeful demonstration of cruelty aimed at family members and friends of long standing. It is an IED intended to explode families, communities, societies and our government. It is, most of all, as infectious as COVID-19. In 2019 the FBI named the group a “domestic terrorist organization.”

There is no question but that QAnon has succeeded in bringing terror into my world in ways as invisible and insidious as the shards of that demon’s broken mirror. And I see that they celebrate the damage they do with the demon’s glee.