Corona Virus Diary 20: “Whenever the People are Well Informed”

“You know Bill Gates is trying to microchip all of us,” said the guy at the body shop when I was picking up my car. 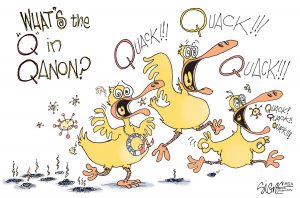 I honestly thought he was yanking my chain. We had just exchanged what I thought were joking words about information revealed by using my credit card. I have a cell phone and a couple social media accounts and I figure Silicon Valley and most merchants already know more about me than I know about myself.

He continued. I paraphrase somewhat. “Yeah, I don’t know why Gates is all involved with viruses. But Gates and Anthony Fauci go way back and are in on this together.”

So I asked the repairman point-blank: “So you’re a follower of QAnon?”

He didn’t really seem to recognize the reference. He said had discovered this “information” on the internet and in following it up discovered there was a lot to be found with a little “research.”

I said only, “None of that is true, you know,” signed my credit-card slip, took my key and left.

They Are Hiding In Plain View

This guy seems well-spoken. I would guess he is in his forties, maybe early fifties. He has kindly blue eyes, a good haircut, and wears a stud in one ear. Pretty normal. A regular citizen.

If he was simply a Trump supporter, I might think he harbored some unsavory attitudes about immigrants, people of color and climate change. And he may well be a Trump supporter. What disturbs me, however, is that he is an unexceptional person of voting age, an undistinguished small-business person in my community, and he can’t begin to distinguish fact from fiction when he encounters it on the internet. 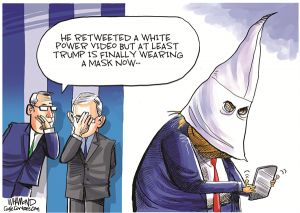 the man in the mask

At this moment we struggle with a pandemic and economic meltdown. The President and First Lady who have defied medical recommendations about masks, have been diagnosed, as has their son Barron, with COVID-19. Trump, however, still denies that masks and social distancing protect people from the disease.

What people believe and the sources of that information matters more than ever. The election is eighteen days away as of this writing.

How people choose to exercise the franchise on November 3, 2020 will set the United States on one of two distinctly divergent paths come January 20, 2021. It will matter deeply whether people are making their choices based on verifiable facts or on fantastical tales from the internet that they want to believe. We will see how many gray cells in how many brains of the plebiscite have been annihilated by the unrelenting avalanche of lies that Trump triggered when he announced his candidacy in June 2015.

My greatest fear? The permanence of the enmity that Trump has maliciously and incessantly fomented between his followers and nearly everyone else in this country. The paranoia and suspicion he has fostered that may never abate.

The state of this nation breaks my heart. If we cannot dam the flood of lies, distortions and misinformation that flood the internet, driven by Trump, Russian bots, and cults like QAnon, succumbing to COVID-19 will be the least of our worries. If a Blue Tsunami on election day doesn’t wash away not only Trump but his Congressional enablers, we are likely to witness the destruction of the great humanistic enterprise that has been American democracy. 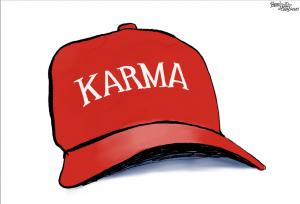 Thomas Jefferson wrote from Paris to a friend in America in 1789 saying,

that wherever the people are well informed they can be trusted with their own government; that whenever things get so far wrong as to attract their notice, they may be relied on to set them to rights.

“Whenever the people are well informed.” Would that such might apply broadly to the voters of today’s United States of America.