Dying For What One Believes?

It is Sunday, July 19, 2021, as I write. I read the COVID statistics published in The Baltimore Sun every day, have been since they began printing that little gray box in the paper. I noticed today, with shock, that the death toll had jumped by four in Harford County, where I live, overnight. The day before it had jumped by three. Our population is a little shy of 256,000; our vaccination rate is about 61% of eligible residents; 18,821 cases of COVID have been confirmed; 326 people have died since the pandemic began here officially in early March 2020.

According to the database in The New York Times, the number of cases here is up 2% in the last fourteen days, and the number of hospitalizations is up 23%. That means that while only a few more people are falling ill, they are getting much, much sicker. More of them are also dying. An average of 1.6 people have died each day over the last fourteen days; Seven people have died in the last two days.

Yet 39% of those eligible for vaccination have chosen not to get it. Some say they are waiting for more evidence of the vaccinations’ safety and efficacy. They don’t feel the evidence accrued in the last nine-plus months is sufficient. Perhaps they believe that tweet posted by rapper Nicki Minaj about her cousin’s friend who suffered from swollen testicles after getting the jab. Why listen to the innumerable medical experts who have explained that there is no mechanism that could cause such a side effect. 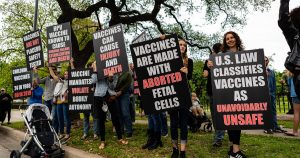 Maybe they are listening to their Republican First District congressman, Andy Harris. His constituency includes all of the Eastern Shore and everything north of the I-95 in Harford County and chunks of Baltimore and Carroll Counties.  Harris, an anesthesiologist by training and a conservative politician fully converted to Trumpism, objects to any mask or vaccine mandates at all.

Public school parents are up in arms about mask mandates in schools. In August, protesters at our school board meeting were so unruly that the meeting had to be closed. They were so violent in their threats that the Superintendent of Schools had to leave in the company of security personnel. As near as anyone can tell, the kids are fine wearing masks, and a fair number of them over the age of twelve would prefer to be vaccinated. The parents, though, have a political battle to wage, and severe illness and dead bodies are just collateral damage.

In January, when vaccines first became available, I put us on every imaginable list and called every source for weeks until I was able to schedule my Dear One for the Moderna jabs at our local Walgreens. Age and chronic diseases put him high on the list. I kept at it for another few weeks until I secured my own appointments. I finished my series of two in April. My Dear One was advised by his doctors to go back for a third and did so. My Tattooed Boy received his over the summer. Given the trouble I had getting our appointments in the late winter and early spring, I figured that my county was going to get to that 80% that marks herd immunity without too much trouble. I guessed wrong. 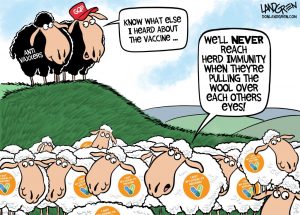 And I should have known better. This county is a scarlet field in a cobalt state. Agriculture remains important and towns are dense with churches, many of them fundamentalist and evangelical. Trump-Pence signs are still in place. This community has pretty well committed to Making America Medieval Again.

And they are willing to die for those beliefs.