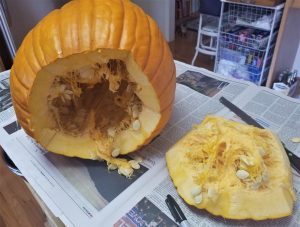 I noticed the post on Facebook suggesting that you remove the bottom of the pumpkin and not the top. While I didn’t pay attention to the details, I grasped that the seeds and guts would be easier to clean and that the candle or other illumination would be more firmly settled on the base. Seemed like a good idea.

I have been carving pumpkins for sixty-ish years. I’m not particularly good at it but all jack o’lanterns, even mine, glow with that Hallowe’en je ne sais quois when they are lit and placed out in the dark. I set mine on a chair out in the cul-de-sac where they will be visible from the intersection, a lure to the candy-hungry youngsters. 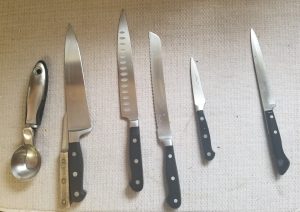 tools of the trade

As trick-or-treating loomed, I decided to give it a try. I had found a rather lovely oval pumpkin at Brad’s Farm Market and sketched out some faces. That is what my mother taught me: draw the face you want on a piece of paper before you start hacking away at the squash. I decided on open eyes, open mouth.

I covered the kitchen island with newspaper and laid out my tools. Then I cautiously sawed off the bottom and cleaned out the seeds and loose pulp. Hmmm. The stem is now a secure handle to grip during cleaning. Good enough.

I drew the features on with a Sharpie before setting knife to gourd. (I discovered afterwards that if some of the guidelines remain behind—and we all know that Sharpie ink doesn’t dissolve in soap-and-water—squirt a little Goo Gone on a towel and the marks wipe right off.) 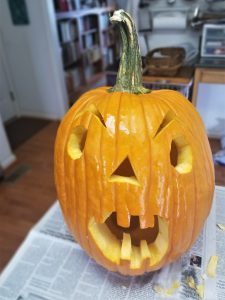 I don’t attempt complicated shapes. Triangles and squarish forms are easiest; gentle curves are a better choice than true circles. Simplicity is key. Trick-or-Treaters—and the parents that are driving through the subdivision—have to see the jack o’lantern from the intersection on the other end of my cul-de-sac. 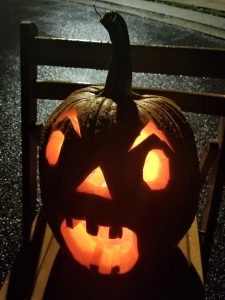 Last year I realized that propping the pumpkin up on the large rock at the end of our driveway just wouldn’t do. This year I took a chair out to a point where visibility would be assured from almost 180 degrees. It didn’t produce the flood of costumed kids I that would justify my expenditure on candy, but the crowds were good from a little before six to almost eight.

The Remains of the Day

The next morning jack o’lantern was taken down to the edge of the woods and left in pieces for the wildlife. Did they enjoy their treat? Not nearly as much as the happy hippos I saw on Facebook enjoyed theirs. And not as much as the kids enjoy my pumpkin pie. But then I make that from a can of purée.