Mercy me—is the year almost ended? 2014 gave us adventure, romance, challenges and sorrow. Suspended as I am among so many feelings, none has gravity sufficient to pull me close. What consumes me now are the tasks ahead from collecting the turkey from Rumbleway Farm where our bird spent the best part of a year gobbling in sunshine and rain to the marathon of dual Thanksgiving dinners, Christmas tree decorating, shipping gifts to those so far away, and, of course, exams, papers and grades for my MICA students.

Each year I tell myself to start this letter earlier. Every year the moment when I draft my thoughts creeps closer to the deadline by which holiday greetings must be mailed. Why? Because time moves at increasing velocity—Christmas ornaments are barely stowed when I realize it is time to buy Easter’s buttercream eggs at Bomboy’s. When I have just thought of something to do with all those fresh local blueberries in July, I must carve the Hallowe’en jack-o-lantern. Then once again the letter that is our Christmas card.

Somehow, however, we managed to read, teach, garden, work on devising the right recipe for seeded rye bread, hang.

A brochure arrived in the mail as we were contemplating My Dear One’s milestone birthday: “Gardens of the Caribbean on the Sea Cloud.” In 1934 my great-aunt Helen Cutler boarded that ship as French tutor to ten-year-old Nedenia Hutton (now the actress Dina Merrill) and general factotum to Nedenia’s parents, E.F. Hutton and Marjorie Merriweather Post. Helen’s stories of the Sea Cloud—then the Hussar V—fired my childish imagination. My Dear One knew the yacht too, recalled it anchored in the Chesapeake Bay near the old Tydings’ place in Havre de Grace in the 1950s. So off we were for a week of 5-star—6-star?—luxury. There were brilliant flowers, turquoise waters and the unfortunate nausea that assailed me because I was too pigheaded to stick the scopolamine patch behind my ear when we deplaned in Antigua. The greatest souvenir? The hours spent under sail. “The engine drives the boat through the water,” Peter Warwick, the naval specialist on the cruise said. “With the sails up, she moves with the water.” You can have your balmy temperatures, your shell-strewn beaches, your unspeakably indulgent service; give me that moment as the boat lifts with the wind. Give me that stateroom that Helen almost certainly visited (or maybe lived in) and corners of the ship that she described so vividly in her tales and journals,

We had also been thinking about a trip to Rome and why not do it all? In April we spent two weeks exploring the Eternal City from our home base in Trastevere. Our apartment just west of the Isola Tibertina put us in easy walking distance of nearly everything—although we also developed a deep appreciation for trolley line H and Lungotevere bus 280. Our digs were in the least touristy section of a not particularly touristy area; our friends were the butcher, the cheese seller, the fruit and vegetable vendors and the proprietor of a most excellent wine shop.

In October we continued our domestic explorations, this time mapping a triangle from Columbus, Ohio, through Dayton to Indianapolis, south to Cincinnati and back to Columbus. Knocked a pile of museums off my bucket list. Found an amazing taquería and Mexican grocery in Indianapolis. Enjoyed the best Japanese restaurant imaginable across the Ohio River from Cincinnati in Kentucky. Located a bar that serves unmanageable quantities of rib-sticking food in Columbus.

My 45th high school reunion arrived in 2014 and what could be more fun than 50 sixty-something-year-old women ready to party? Somehow I got sweet-talked into fundraising for the class—and darned if those fabulous ladies of 1969 didn’t open their hearts and their wallets; we raised the highest amount of dollars and had the highest rate of participation—over 60%! Our 45th coincided with Emma Willard’s 200th—and it was a humdinger of a weekend. We had retrieved classmates who had been lost, some of them for decades. We reviewed history, compared subjective memories and objective records, brought soothing air and gentle light into dark and fusty corners of memory.

May Reunion was followed by June with family in New England. I knew, thanks to friends more in touch than I, that there would be a bicentennial of the Church on Rabbit Hill in Medway, Massachusetts. 13 of the 33 original signers of the 1748 covenant were relatives and my 5th great-grandfather David Sanford was pastor there from 1773-1810. Despite my infrequent visits and the fact that I have no memory of relatives actually living there, I am sentimental about the town. I am also connected in one way or another to an enormous number of names that appear in Evergreen Cemetery. It was in “The Enclosure” there that I first began to feel the reality of all these ancestors—if only from the materiality of their headstones.

But The Enclosure was a mess. Had been for years. “Aha!” thought I. “Have family time and get the place tidied up.” I put out a call to relatives suggesting they bring gardening tools and contribute to a potluck picnic. Ultimately the work crew included My Dear One and me, both my brothers, two nephews, a nephew’s girlfriend, a niece and her son, and a cousin. It was a magical few hours. On brother brought a long ladder, ropes and serious tree-pruning equipment; cousin and niece, rakes and clippers. We not only cleared the ground of decades of accumulated leaves and twigs but lopped branches off an ancient hemlock looming ominously over the Sanford Memorial. It has been almost a hundred years since that column with its funerary-urn finial has even been visible. Is there anything more satisfying in terms of obvious accomplishment than housecleaning? Leaving this family home spick-and-span—if only for a moment—made me feel the blessings of my ancestors.

Our route to Medway first took us to Maine where we enjoyed the Colby College and Bowdoin College art museums, taste-tested lobster rolls and stepped ankle-deep in muddy runoff while trying to photograph the heart-stopping blue of lupines. We also spent time I will forever cherish with my uncle and aunt. We caught up on news and giggled, listened to music and dined on oysters fresh out of the Damariscotta River. My uncle passed away gently on 24 September. The news was not unexpected but the loss leaves an ache. This year’s quotation is for him, a man who seemed always “to awaken that light on the faces surrounding him.”

When you have once seen the glow of happiness on the face of a beloved person, you know that a man can have no vocation but to awaken that light on the faces surrounding him. In the depth of winter, I finally learned that within me there lay an invincible summer.  – Albert Camus

Best wishes to you all for a satisfying and auspicious 2015. 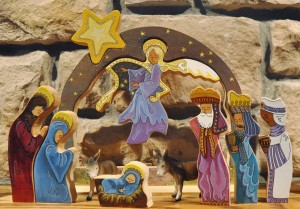