Dearest all, whoever and wherever you may be: 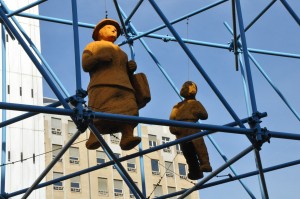 Newscasts from Paris in November would cut to Brussels and all we could think was, “We were just there in April.” We recognized streets, buildings, monuments. We thought about our little apartment on rue Potagère (Warmoesstraat) in Saint-Josse not far from the Botanical Garden, our Halal butcher who sold sweet, tender lamb and the Muslim shopkeepers who kept us stocked with fresh vegetables. We remember the young mother wearing hijab, with her little boy and girl, who helped us find a suburban train station, walking with us nearly all the way. The bad news was not the way we wanted to recall ten fine days in the Musée des Beaux-Arts, the mussels, gaufres and beer, the Art Nouveau architecture or our friendly battles with happy crowds on daytrips to Bruges, Ghent and Antwerp. And our hearts are broken by the violence and the loss of life.

Belgium was glorious and I will never look at Flemish art the same way again. Over and over and over again I stood gobsmacked in front of masterpieces by Jan van Eyck, Hans Memling, Pieter Bruegel the Elder, Peter Paul Rubens, and so many others, each just incomparable. This is art that shapes one’s soul and since then those well-worn lines by W.H. Auden sound a more resonant chord: About suffering they were never wrong, / The Old Masters; how well they understood /  Its human position…” 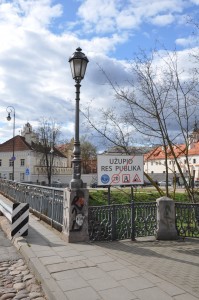 departing the Republic of Uzupio

Next stop Lithuania. Our apartment in the self-proclaimed Republic of Užupis, the bohemian neighborhood of Vilnius in the embrace of the Vilnia River, put us about a ten-minute walk from anywhere in Old Town; different bridges lead in different directions. The views from Gediminas’ Castle and the Hill of Three Crosses, Trys kryžiai, were more than worth the climb. Restaurants and groceries and the boutique where I bought my hairy pink Lithuanian sweater were within a block or two of home and the best bakery-patisserie in the world—in the world—was across the street. From here we drove to the Hill of Crosses in Šiauliai, to Aukštadvaris, Birštonas and Punia (of which more later), and to the sprawling sculpture collection of Europos Parkas. A room of my very own in Vilnius? It would be a dream come true.

Lithuania is, of course, my Dear One’s country, the forest where his ancestral tree put out its roots. During this visit the canopy of that parental plant spread higher, wider and leafier. A genealogist found records of his paternal grandmother’s line, sending us to Punia where gravestones bore familiar names. (The origin of his  paternal grandfather remains for the present a mystery.) We returned to Balbieriškis, his mother’s village on the Nemunas River. Cousin Rimantas took us on a tour of the Nemunas Loops Regional Park and introduced us to more relatives at a dinner in his home. His wife Angelė lays a splendid table, a Lithuanian feast worthy of Michelin stars! That evening I compared genealogical notes with cousin Marytė who has been debriefing her mother, a nonagenarian of prodigious memory. More names. More details.

We grew our “family” in other ways as well. More than fifteen years ago Dan reached out through cyberspace to a fellow living in Kaunas. (Tradition places my Dear One’s father’s father in that region.) Luckily Audrius reads and speaks English.  He responded: no, his family had no recollection of ancestors who had immigrated to America, but he honestly did not know. We communicated intermittently over the years; we knew that a job change had relocated them (Audrius, his wife Diana, their daughter Salvija and son Orestas) to Vilnius. Might we finally meet? A casual pizza supper on a cold, sleety Saturday night turned into a weekend of adventure. Audrius and Salvija translated as we shared photographs and bonded. Sunday we went to the National Museum and Palace of the Grand Dukes of Lithuania—a truly extraordinary place. Audrius had even arranged for a private guide who spoke English. At their apartment Diana served a chicken so delicious I am sure I will never taste another that good. We have no idea exactly how she prepared it but the dish is now known as “happy chicken from the village.”

Family events continued. A first-ever reunion of the Cutlers took place in Massachusetts on a perfect New England October weekend, all blue skies and brilliant foliage. My brother Jim proposed the gathering. I dug into my address book and memory and scared up more than twenty cousins, some of whom I had not seen since the sixties and one of whom I had never met at all. We convened Saturday in Medway. Sheila of the Medway Historical Society took us everywhere in that town the ancestors had preached, lived, worked and played. We went to churches, family homes, former factories and, of course, Evergreen Cemetery (where it seems that everyone is either a cousin or an in-law.) On Sunday Jim threw open the doors of his home in Ashfield. Brother Tim provided the liquid refreshments and sister Priscilla created certificates that recognized every participant from oldest to youngest and all the unique identities in between. It was the party of parties. 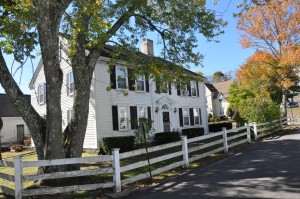 Each year gets to be more of a blur, though. The museums visited in Texas during our January jaunt snuggle check-by-jowl with collections in Cleveland, Ohio in July and western Massachusetts in October. I scan back through pictures I took and think: “Gosh that was a lot of snow in February and March;” or “There’s Tintoretto, the turtle who lives in the garden. That was June and I really need to do some yardwork;” and “Gracious, we had a lot of gray tree frogs and Swiss chard in August.” The Christmas letter becomes my gift to me, a chance to slow time down and revisit everything that made each month matter.

And it was altogether an excellent year for family. My Dear One’s grandson (an MFA candidate in graphic design at Maryland Institute College of Art where I teach) built a website for my son the tattooed boy, aficionado of all things heavy metal. His sister is in her senior year at York College in Pennsylvania and the oldest grandchild is well established at the family firm. Everyone, certainly, is very, very busy.

Last year my friend and colleague Eglutė—imagine my delight, a Lithuanian on the MICA faculty!—recommended some books she thought Dan might enjoy. One of them was The Ballads of Kukutis by Lithuania’s beloved poet Marcelijus Martinaitis. Translator Laima Vincė writes, “For Lithuanians, Kukutis carried the message of freedom. Outside of Lithuania, Kukutis bore witness to the fragility and the tenacity of an occupied people’s will to survive.” For me the words celebrate the invisible and fragile threads that keep us from losing each other—and getting lost ourselves.  Here, an excerpt from “Kukutis’s Trip on the Samogitian Highway”:

What makes Lithuania
so Lithuanian?
Where does it come from?
No one has ever been able to find it
and destroy it—
whatever wars may have passed through,
however the land may have been trampled—
Lithuanian skies just go on looking
Lithuanian.

Wherever you may travel
or whatever you may think
will always resemble Lithuania—
her skies,
her birches,
the warmth of her grain
In your palms,
Her harvest,
flowered by women.

Our warmest wishes for a safe and satisfying 2016 to you all!