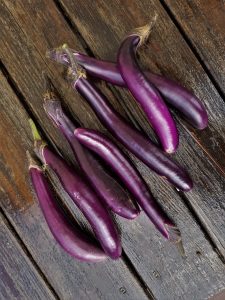 A single Japanese eggplant plunked in a pot parked on the edge of the driveway around the first of July was still producing beautiful purple fruit at Halloween. Eggplant parmesan. Ratatouille. A whopping lot of pasta alla Norma. Dan reaped the final bounty on 9 November while mesclun lettuce, radishes, beets and oh so much Swiss chard, as well as all the herbs, were still coming in.

Vegetables thrive and so does Nature here. In the spring a pair of barred owls jousted over a roost in a nearby patch of woods. A pair of fox kits hung out on the lawn next door last summer and a few days ago a harrier inspected the premises from his perch on a bluebird box. Deer brought fawns to say hello. Then after a light snow a few nights back paw prints and hoof prints mingled across the yard and danced onto the front doorstep and across the drive, as though deer and foxes had hosted a hoedown by the light of a silver sliver of moon.

These days I cram employment in between jaunts. Cheap airfare lured us to Salerno, Italy, in January where we fought through snowstorms and froze our patooties off. Shops did a brisk business in arctic gear; restaurateurs dragged kerosene heaters into their dining rooms. The sun shone on our wanderings in Pompeii (crowded as usual) and Paestum (all but forsaken). A day or two in Ostia, before our return flight, gave us time to explore the World War II museum and mournful American cemetery in Anzio, and the ruins of Hadrian’s Villa.

The Lone Star State summoned us for March Break. San Antonio rocked: we remembered the Alamo, visited art museums, wandered the Riverwalk and chowed down on Mexican food. Houston was nice, but oh-my-heavens, the traffic! One day we motored into the Brazoria National Wildlife Refuge on the Gulf, then along Galveston Island. How beautiful the coastline but how exposed; it’s hard to imagine why anyone would build a home on those fragile sand dunes.

A fortnight in Paris in the jolie mois de mai meant long rambles and taste-testing steak tartare. (The best tartare comes with a speckled quail egg at Café Le Dante on the Left Bank.) Having hiked three of the “Eight Guided Walks” recommended in our EyeWitness Guide, we now know that it takes way longer than 90 minutes to cover a two-mile route. I find cemeteries irresistible and we paid our respects to crooner Jean Sablon in Montparnasse and painters Édouard Manet and Edgar Degas in Passy and Montmartre. Then finally—finally! —we made it to Monet’s studio and gardens in Giverny. Also to a couple corners of the vast Bois de Boulogne. Our apartment on the rue Legendre in Batignolles was the perfect home base. Bakeries, butchers, greengrocers, cafés, wine shops, cheesemongers, restaurants, boutiques of every kind filled in every storefront in every direction. Metro and bus stops were six or seven minutes stroll both southwest and northeast.

Quite unexpectedly an entire week in August was blank in our calendar: no medical appointments, haircuts, family gatherings, no nothing. We turned Ruby the RAV4 toward the Erie Canal and knocked a whole bunch of museums off the bucket list along the way there and back. The landscape across upstate New York is perfect for lollygagging down detours. We also got a chance to think of what that extraordinary waterway meant in terms of history: investment, technology, patterns of population and the displacement of Native Peoples.

Chittenango Landing on the Erie Canal

Unable to resist another sale on plane tickets, we winged off to Atlanta for the final explore of 2017—I’ve wanted to see the High Museum for eons. Recent uproar over Civil War monuments suggested a visit to the Stone Mountain Confederate Memorial which turned out to be bad art with a disquieting history that is extremely big. As in Houston, we were left with memories of jammed-up highways. Whether rush hour or weekend, roads were parking lots pretty much all the time.

Retrospection and serendipity collided this summer when an email inquired if I could provide information about Elwyn Greeley Preston Sr. (my maternal great-grandfather) and also if, by any chance, I was the Ellen Cutler who had graduated Emma Willard School in 1969. Why yes, I can and I am. Liz Durfee Hengen (EW ’70) is the Historical Consultant working on the Squam Lake National Historical Register Initiative. Proofreading her magisterial document was a plunge into Boulderwood trivia (Boulderwood being our family compound on the lake). Cousin Ellen Preston and I argued: we debated the colors that identified the sets of tools and the Lawley sailboats belonging to the four main branches of the clan: yellow (my Pop), blue (Ellen P.’s father) and red (Uncle Dick). Purple, I said, was the fourth. Absolutely not, Ellen said, it was gray. And wouldn’t someone have had green? Eventually we got to the truth. EGP Sr. had green; three sons were assigned yellow, blue and red; the fourth originally got purple, which was later changed to gray. Were there lights strung along the back paths or not? (There were.) Did we dress up for Sunday services at Dickie’s Chapel or not? (We did.) The research is a treasure: family lore confirmed and debunked, a history more complete than any one of us has ever known. My siblings and I sold our camp some years ago and I have not been back in a decade. Leaving Boulderwood was the right decision—but one that still brings an ache to my heart.

The hurricanes and fires of 2017 felt very, very close. Dear friends in Bonita Springs, FL, lost their beautiful trees and sustained serious damage to their home. A cousin in Katy, Texas, avoided floodwater. My sister Priscilla and her husband Hugh, and Jay’s father and stepmother, Roger and Judy Oakley, made it through safely in Sebring and Fort Meyers, FL. Friends escaped incineration (twice) in California. I thought often as well of my late Aunt Helen, my godmother, who went to Puerto Rico each winter to teach English. She would be heartbroken to see the storm damage left on that beautiful island and the suffering of the people she loved so much.

I miss seeing grandson Miles Holenstein on the MICA campus as he graduated in May with an MFA in graphic design and abandoned us for a nifty job with IDEO in San Francisco. No more kids in educational institutions now. Miles’ sibs Alice and Dylan are well-established members of Gravic, the family firm. No next generation heading off to college. Sigh. It’s a milestone perhaps.

My Tattooed Boy is one of the three original hires still employed at Baltimore’s B&O American Brasserie and this year made his own culinary contribution.  Brendan, master mixologist at the B&O, encouraged Jay to represent the restaurant at the Baltimore Cocktail Week Competition last April.  Entrants were given some general parameters and a short list of ingredients from which they had to choose an item or two; his libation, The Rite of Spring, won!

Normally I offer you poetry or some sort of story or philosophical musing, but I know that what I really need, as I look back on the last eleven-plus months, is a good, stiff drink.

Jaymo’s The Rite of Spring

Place all ingredients in a shaker. Shake without ice. Add ice and shake again.
Strain into your glass and serve.
(A coup glass—a stemmed glass with a wide, shallow bowl—is nice if you have one.)

Love to one and all!

My Dear One and Me