We reached out to Audrius about fifteen years ago as we jumped into the quagmire that is the genealogy of Lithuanian immigrants to the United States. He shares a surname with my Dear One and a rather random Internet search turned him up in Kaunas. We grasped at that straw; it was an article of faith in my Dear One’s family that his paternal grandparents had come from “Kaunas.”

An exchange of emails ensued. The events of September 11, 2011 came to pass and Audrius wrote us the kindest, most heartfelt note that described Kaunas’ public demonstration of shared sorrow, and he expressed his affection and support for us. That secured his place in our hearts.

Audrius does not know a great deal about his own family and his father, much the youngest sibling in a large family and now the only one still living, has had little to offer. The fascination with one’s family tree seems to be an American thing although the passion spreads. We had been in touch intermittently over the years. When we planned this trip to Lithuania, and decided to make Vilnius our home base, we invited Audrius, Diana and their children Salvija and Orestas to dinner. What we thought would probably be just a short dinner of pizza on a Saturday turned into a whole weekend.

Audrius and his family arrived at our rented apartment in the Užupis neighborhood on the dot of 4:00 pm, which is to say 16:00. They brought us gifts to take home—beautiful embroidered linen napkins and a sack of special herbal tea. They lugged in sacks of fruit, cheese, beer and snacks, that several days later we have not quite finished consuming. Next to all this, our gifts for them—maple syrup, Belgian chocolates, books for the children—were small tokens indeed. Audrius and Salvija handled translating chores. Whatever else Lithuania is doing—and these parents are doing—the young people are smart, accomplished and a joy to be around. 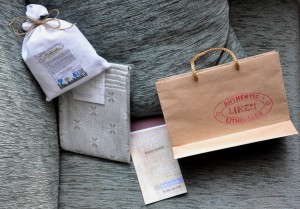 gifts of tea and linen

Conversation focused on who we all are; of course we took pictures.

The next day, this time on the dot of 13:30, Audrius and gang pulled up at our door and my Dear One and I piled into the middle seat of the minivan. (The minivan is a recent purchase. They motor around the country, to Austria, the Czech Republic, the other Baltic States and beyond, staying at campgrounds and seeing the sights. The old Passat, a good vehicle, got crowded on these treks.) 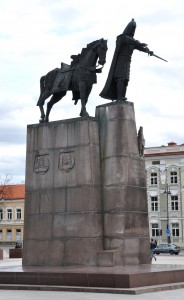 Gediminas and his steed

We drove to the National Museum—Palace of the Grand Dukes of Lithuania where Audrius had arranged a tour with an English-speaking guide and insisted on paying for our tickets as well as for the guide. Said guide, whose name I did not ever quite get, was wonderful. I asked about her education, assuming that she must have studied history at university. No, she had not. Her knowledge was gained through reading, study and the resources of the museum, where she had started working three years earlier.

What did we want to do next? Yikes, we had been in the museum for three hours, so long the book shop had closed and we needed to get our coats and scoot. As they had already invited us for dinner, we suggested we head to their home in the suburbs across the Neris River and relax. 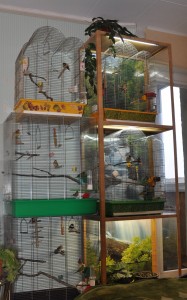 Audrius took us on the scenic tour, pointing out the glass tower where he works on the fifth floor (“The view is not so good as it is from the fifteenth floor”). We got a sense of the growth, the ambitions, the mark the modern city and make it the complement of the UNESCO-protected Old Town where most tourists spend their time. We drove past the school Salvija attends and battled for a parking space at the apartment complex where the family lives. Upstairs—a hike to the fifth floor—we met the family dog and cat. We looked through albums of wedding pictures and photos of trips. We talked cooking and the merits of Diana’s “chicken from the village” (the best chicken I have ever eaten in my life, ever), a fine repast that included toasts made from a spicy, strong and utterly delicious Lithuanian spirit made from mead, blueberries and currants. In the corner Diana’s stunning collection of exotic finches twittered, played, and splashed in their baths. My Dear One accepted the gift of a folded paper boat from Orestas. And we took more pictures.

Then the entire family drove us back to our apartment. They parked the minivan, walked us to out gate and we embraced—eight warm and wonderful hugs all counted.

The generosity and affection they have shown us is as natural and essential to them as breathing.

This is a family we choose for our own.