My Dear One, noticing that we had a lot of empty calendar space from the end of October to the beginning of November, suggested that we fly off to somewhere in Europe. France? Italy? It took almost no time to decide on the Veneto. For ten days we nested in the 18th-century village of Teolo on a mountainside in the Colli Euganei, an area comprised of extinct volcanoes just west of Padua. A neighborly rooster quietly crowed at seven in the morning, right at sunrise, to let me know it was almost time to run downstairs to the Bar La Piazzetta and get cornetti con crema for our breakfast. The steep roads and dizzying switchbacks of the hills were thronged with bicyclists, especially during a sunny weekend, a virtual Giro d’Italia.

Historical sites, abbeys and gardens, more than we had time to see, punctuate those basalt mountains. The home in Arcuà the poet Petrarch built in 1368, and where he died in 1374, remains almost unchanged. The Benedictine monks who live, work and pray at the Abbey of Praglia, founded in 1080, raise the herbs that make their potions, lotions and soaps. Dating mostly to the 17th century, Villa Contarini in Vò Vecchio was the site of a holding prison for Italian Jews before they were shipped to concentration camps. A small museum in the basement is a memorial to the victims who had been neighbors and friends. Local artists exhibit their work in the upper rooms. Este, with its castle ruins and wonderful archeological museum, was perhaps our favorite place, a least in part because of our repeated visits to the gelateria Vaniglia-Cioccolato.

A premier delight of the Veneto, for me at any rate, is the architecture of Andrea Palladio (1508-80). We managed to get to the Teatro Olimpico, Villa Rotonda, Villa Barbaro and Villa Emo. Between Barbaro and Emo, in the small town of Maser, we enjoyed what was certainly the best meal of the sojourn at the Osteria Jodo: tagliatelle di zucca su crema di porcini con crudo croccante e noccioli, which Google awkwardly translates as “pumpkin noodles on porcini cream with crispy raw and hazelnuts” and ravioli di patate ripieni al morlacco con burro, erba cipollina e speck. That would be “morlacco [cheese] stuffed potato ravioli with butter, chives and speck.” I barely have words to describe those beautiful buildings and none at all for those flavors.

Excellent meals also happened nella cucina where we invented a sort of carpaccio salad made with fresh veal sliced paper-thin served on tender Bibb lettuce with capers and a drizzle of olive oil whisked with a drop of vinegar and a little pepper. On the second Saturday of our stay, our host Maurizio brought us two pizzas, one with artichokes and olives, one with spicy sausage. Maurizio apparently makes pizza from scratch to share every Saturday; a text message with a photo of his fiery oven announced that cooking had begun.

Our trip concluded in Venice so that we’d have easy access to Marco Polo Airport for our 7:15 am flight home. Sunshine vanquished the rain on Wednesday afternoon and Thursday was all brilliant blue sky. We saw a bit of the Biennale and were disappointed that the Lithuanian Pavilion, which had won the Golden Lion award, was closed. We ate al fresco outside the gates to the Arsenale and battled some very assertive pigeons for control over the basket of breadsticks. We were barely back home in Aberdeen when images of acqua alta, greasy gray water filling walkways and pouring into shops, restaurants and churches, filled the media, terrifying and tragic.

There were other rambles in 2019. We celebrated my birthday in January in New York City, where the breakfast staff at the Hampton Inn Times Square South sang “Happy Birthday” and presented me with a birthday muffin. We joined grandson M. in San Francisco, where he works for IDEO, and he guided us into wine country and the windswept headlands of Marin County. A weekend in Damariscotta, Maine, for my Aunt Doffy’s memorial may have been the last hoorah for us, the first and second Preston cousins, who remember a childhood on Squam Lake in New Hampshire that was like no other. We, who still think of ourselves as the third generation have now become—or will relatively soon become—not just the elders but the oldest of the elders.

The gathering in Maine inspired a dive back into my own genealogy. Cousin E. (my mother’s cousin) asked for a copy of the genealogy for her sister, Rev. E., as a birthday gift; before sending it out I spent a while cleaning things up, correcting and expanding the record. Later, I continued whiffling twigs farther out on family branches. What did I discover? That one set of 8th great-grandparents, Richard and Anna (Perry) Hassell, along with a son and a neighbor, were massacred by Native Americans in Dunstable, Massachusetts Bay Colony (now Nashua, New Hampshire) on September 2, 1691. There is even a stone marker that records the event. Much to think about there. 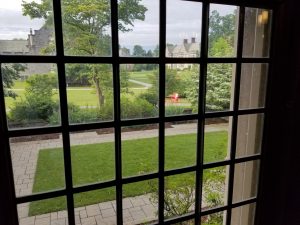 On June 14, fifty years to the day that the Class of 1969 graduated from Emma Willard School in Troy, New York, fifty-six of us returned to campus for a weekend of hugs, discoveries and lots and lots and lots of purple. (Odd years at Emma are Purples, evens are Greens.) Many of us lodged in the dormitories—and the beds, bathrooms, and corridor alcoves felt eerily familiar. Fifty-six women represents fifty-four percent of the graduating group, something probably closer to thirty or thirty-five percent of all who were at some point members. There is no way to describe what went on other than to say it was magical, healing, surprising and loving in ways I couldn’t have anticipated.

My Tattooed Boy provided both a giddy high and the absolute low for the year. In January he asked did I “want something for this year’s Christmas letter even though the year is only six days old?” Well, he had just been named “2019 Employee of the Year” for Baltimore’s Monaco Hotel and the B&O American Brasserie. Pretty swell, eh? A month later, on February 8, my Dear One’s birthday as it happens, an unfamiliar female voice on the Boy’s phone informed me he had been hit by a car while walking across a street near his home. Before I continue, just know that the lad is fine now. He suffered a broken right tibia and fibula, dislocated left shoulder (plus torn rotator cuff and fractures). To the amazement of his medical team, there were no injuries to his head or spine, even though he somersaulted over the hood of the car and smashed the windshield before hitting the pavement. After two surgeries and a stint in rehab at Johns Hopkins Bayview, he came home with me on March 1. After another three of so weeks he was able to return to his apartment. First week of May, his coworkers welcomed him back to work. Yes. It was awful. Truly awful. Yes, it could have been much, much worse.

My Dear One found the quotation for this year’s letter. “Everybody Tells Me Everything” (1940) by Ogden Nash (1902-1971), suits the end of this turbulent year for America.

I find it very difficult to enthuse
Over the current news.
Just when you think that at least the outlook is so black that it can grow no blacker,
it worsens,
And that is why I do not like the news, because there has never been an era when
so many things were going so right for so many of the wrong persons.

I saw a meme the other day that suggested older people are in their “dog years”—you know, one calendar year is the equivalent of seven years of aging? I wish I at least had the sense of being in the present that dogs take for granted. At any rate, may 2020—a year whose number sounds, you might say, positively visionary—offer a few moments of presentness for us all. 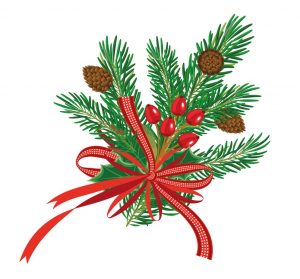