I have long disliked going to the grocery store. From the time I was twenty and in my first apartment I made a list based on a strict budget, went in, collected items, paid up and got out. My mother loathed going to the store with me. I was boring, she complained. I never bought anything interesting. I had no sense of spontaneity. My refrigerator, moreover, didn’t have anything good in it even when I had just come back from the store. She found my dedication to budget, and my smugness when I could come within fifty cents on a fifty-dollar list without going over, intolerable.

She was right, was my Ma. I am the worst possible shopping companion. 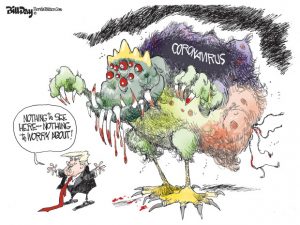 Heretofore my Dear One had done the grocery shopping—but then he does most of the cooking. He is an informed and frugal shopper, collecting coupons, attentively reading the weekly circulars and choosing his destination based on the best deals. Left to my own devices, I would confine myself to Shop-Rite, which is nearest and adequate in quality, and Wegmans, because I am a snob.

Since we began sheltering in place, however, I had tried to become a better shopping companion, particularly since my Dear One ticks all the boxes for COVID-19 susceptibility. We write the list together and often head to the store together. I leave him isolated with book or radio in the car while I mask up and dash in.

I am not left to my own devices, however, so the last few weeks have been case study in approaches to mitigation. From the beginning all the stores met the lowest bar: most employees wear gloves and masks. All demarcated six-foot segments around by the cash registers. Most erected plastic barriers between the buyer and cashier. Some upped their game in the matter of sanitizing carts and check-out areas.

Wegmans, were I grading stores, gets an “A” for “able.” They are able to welcome customers at a single door, direct them to a stash of freshly cleaned carts and a dispenser of hand sanitizer, able to create the illusion of business and safety as usual. I collected what I could from my list then trundled toward the cash registers—and on to the far corner of the store to get in the checkout line. New arrivals looked grim at the prospect of a long wait but the line moved swiftly. An employee with a walkie-talkie directed each of us to the next available cash register as we arrived at the front. And smiled. When I arrived at station 15, the counter and credit-card reader were freshly sanitized and another smile awaited. When I left through the dedicated departure gate I was feeling quite cheery as I removed the scarf I had tied around my nose and mouth.

The Backside of the Bell Curve

Most of the other stores are clinging to a low “C” or in danger of failing.

At Lidl, for instance, I found scant evidence of mitigation procedures. Carts were not being cleaned, nor were there wipes and hand-sanitizer available to shoppers. An employee with a clipboard was tracking the number of shoppers in the store but counting isn’t the same thing as protecting. Shoppers seemed aimless; so did the employees. No one seemed happy to be there but no one seemed in a hurry to leave. Except me.

At Weis, the nice young man at the register said that that customer carrier bags were prohibited. Huh? Was there a sign somewhere detailing this prohibition? Apparently there is. The glow I enjoyed as I found the baguettes and red peppers that were my objective faded. I stuffed the store’s plastic bag into my carrier. I also stopped at the door and looked for signage barring my carrier. Yep, it was there. No, there isn’t a snowball’s chance in hell anyone is going to notice it.

Shop-Rite—formerly known to us as Klein’s—is trying to improve. A single door for coming and going has become an in-door with disinfected carts and an employee providing assistance separated from the out-door. They also had an ample supply of our preferred popsicles, “Whole Fruit” brand fruit bars, mango for me, wild cherry for my Dear One. That improved my attitude.

The One Whose Presence Cannot Be Avoided

Walmart is Walmart. My Tattooed Boy worked there one summer, stocking shelves and retrieving carts from the parking lot. It wasn’t a terrific job. 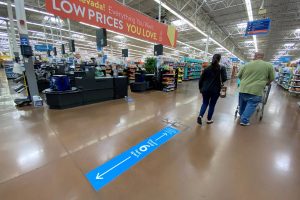 On this visit, I thought I had landed in Fritz Lang’s expressionist masterpiece Metropolis (1927). The parking lot was jammed and customers filed down to the farthest corner of the building, through corridors constructed from barricade tape and shopping carts. Bodies shuffled along on their errands through dingy, film noir-ish light. No one appears to be cleaning any surfaces; containers of disinfectant wipes at the entrance are befouled and nasty.

Customers seemed inured to the inconveniences and the absence of toilet paper.

For the first time I felt truly threatened by the physical proximity of people, aware of their potentially lethal exhalations, fearful of the microbes settling on my clothes, my hands, my hair as I waited to check out with my prescription, a bag of colorful sweet red peppers, and a not entirely fresh yellow summer squash for the soup we would make for supper.

My governor has declared that all people entering retail establishments and using public transportation must now wear face coverings. My grocery stores have all ramped up crowd control and posted signs about the need for face-coverings. By and large, my sense of personal protection is not improving.

As Trump supporters scream about the need to “reopen the economy” and “get back to work,” and morally bereft politicians like Rep. Trey Hollingsworth (R, Indiana) argue that it is better that people die from the virus than business not be as usual, the future looks increasingly grim. It will get worse because we have to fight the disease in order to slow and reverse the economic freefall. 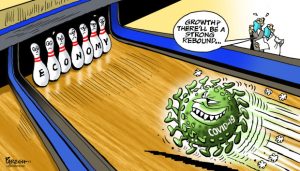 COVID-19 bowls over the economy

Money isn’t going to solve this pandemic. If we don’t focus on the disease, nothing is going to be able to get us through the time of no money that lies ahead, at least for those of us who don’t belong to the one percent the economy serves.