Corona Virus Diary 14: How To Roast A Chicken in Water

There seems to be heightened attention to all matters culinary in the Time of COVID. That’s a good thing, I think. Keeps people out of restaurants and other enclosed spaces and builds skill that we should all have anyway.

We are people who cook and watch cooking and food-centric shows. I’m happy to learn about dishes I wouldn’t in my wildest dreams attempt to make. I look for interesting variations on recipes I already have. But not roast chicken. I use the time devoted to roasting chickens to take a pee, refill my wineglass, check my Facebook feed, or all of the above. I don’t need instructions on how to roast a chicken. I already make a killer bird.

So why was I watching Bill Buford’s video on “Perfecting a Roast Chicken, Without Having to Roast”? Maybe it was COVID fatigue. Or perhaps it was because Condé Nast included it in their spam distribution a few days ago. The “without having to roast” part also caught my attention. 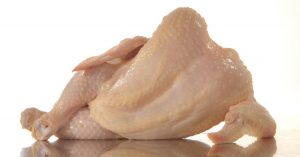 Apparently, this video is part of the New Yorker series. Bill Buford, locked up with his twin sons, has filmed instructions for “Perfect Bistro Chicken.” Frederick directs and George runs the camera. “Today,” Buford proclaims as the video starts, “we are talking about roasting a chicken. The roasted chicken is the test for every home and professional cook, and it’s almost impossible [stress on impossible] to get right.”

What? It’s almost impossible to do a good job roasting a chicken? Balderdash!

A roast chicken doesn’t need to be roasted? In my universe, at any rate, one may not have to light the gas in the oven, but gaslighting alone won’t do the trick.

Buford goes on to explain that the problem is in getting the breast meat and leg meat to the same amount of doneness at the same time. True enough. He points out that there are methods for dealing with this: spatchcocking the bird and “beer can” chicken, for instance. I’ve done both. Spoiler alert: “beer can” is my go-to method.

Then, having acknowledged the merits of the beer can, he dismisses it, claiming “It’s not really roasting, it’s barbecuing.”

He Says To-may-toe and I Don’t

Of course beercanning a chicken is roasting it. Merriam-Webster defines “roast” as a transitive verb meaning (1a) to cook by exposing to dry heat (as in an oven or before a fire) or by surrounding with hot embers. The same dictionary defines barbecue as to roast or broil on a rack or revolving spit over or before a source of heat (such as hot coals). Let’s not get into specious semantic differences, Bill.

In fact, this is an opportunity to talk about the tricks he learned in France and in New York from chefs whose food is, shall we say, too rich for my budget.

Here’s the summary. Truss the bird. Poach it in a stock that requires vegetables not in your fridge and a chicken broth bought from an exclusive purveyor I have never heard of. Haul the mostly cooked bird out of the stock and finish in the oven.

Aha! Even Bill Buford can’t make a roast chicken without roasting it.

At this point in the video, I have the urge to raise my hand here and ask a question: “Please, teacher, why is it that Bill Buford of all people buys chicken stock? We make our own and there are probably five or six quarts of it in the freezer right now. Bet my stock is better than your stock.”

So go ahead and watch Buford roast a chicken without roasting it. The comments the boys make are entertaining. My recipe does, however, involve roasting. Here it is. The results won’t be as pretty as Bill Buford’s  “Bistro Chicken” and it likely won’t have that French elegance, but it will have crispy skin over every inch. Don’t overcook and it should be moist throughout. Easy. Hard to screw up.

Chicken Roasted on a Beer Can