Election Day. I have distracted myself with gardening, grocery shopping, a little laundry. We are all anxious, unnerved. I can almost hear the scratch of pens, and the thunk of the machines ingesting ballots, at the polls.

Analyses favor the Biden-Harris ticket, but I am mistrustful. The GOP-gerrymandered Electoral College turned lethal. Pundits also underestimated the bile of an electorate that had never come to terms with an African American president. No one on the liberal side grasped the extent to which people felt victimized by the changing times. They yearned for a mythical time of “greatness” and the “traditional values” they believed to be transcendent.

The New York Times also published an article about Robert Cahaley I would rather not have read.  He’s predicting that Arizona, Michigan and Florida are all in the GOP column. He was correct in 2016 that Trump would win; I don’t want to think he will be right again.

My pearls! We were wearing our pearls (or designated necklaces) today in honor of Ruth Bader Ginsburg. This afternoon I pulled them from their soft drawstring bag. Pop gave them to Nannie on their fortieth anniversary; Nannie gave them to Ma; Ma gave them to me. I wish RBG could still wear her judicial collars.

We watched an episode of Antiques Roadshow centered on American politics. My Tattooed Boy called on route to his polling station.

So much red on that map. I know, however, that there are huge numbers of mailed-in ballots still to be counted.

There’s a new Democratic senator in Colorado, John Hickenlooper, and that’s something. But we need four new seats to take the Senate.

It was thrilling in 1968 to watch the election returns. A group of us sat in a living room at my boarding school, armed with enormous tally sheets printed by The New York Times. I called out the numbers as they were announced for each state so that a friend could track them. We gave up in the wee hours and by breakfast there was still no decision. 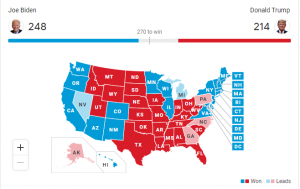 Morning Edition on NPR came on to tell me that Texas and Florida had remained red and that two of Florida’s House seats had flipped from blue to red. Ominous news.

However Arizona appears to have turned bluish and Democrat Mark Kelly appears to be the new senator from that state. That’s two chairs turned. While Nevada, Michigan and Wisconsin are trending blue, Georgia, North Carolina and Pennsylvania are trending red. I have a rock in the pit of my stomach.

Not much has changed. If things continue this way, and the majority of mailed-in votes stay blue, the Democratic ticket will move ahead.

Biden has Wisconsin and Trump is demanding a recount there and a halt to counting in Michigan.

Michigan has gone for Biden by a narrow margin. Arizona and Nevada are still only bluish but one has to be hopeful. Georgia is resolutely red although there are a substantial number of ballots still to count. Damned Pennsylvania hang over our future like the Sword of Damocles.

The election gods delivered Arizona to Biden. Nevada, Georgia, North Carolina and Pennsylvania are still counting the bulk of mailed-in and provisional ballots. Trump’s reelection committee is challenging results in state after state.

Nevada is still pale blue on the map, and Georgia, North Carolina and Pennsylvania are still pink. Patience, Grasshopper!

Trump lies and creates furor. Nothing changes. I head off to bed.

Morning Edition woke me up at 6:00 with the good news that Georgia—Georgia!—had turned blue. Barely blue but indisputably blue. A margin of 2,000 votes blue. 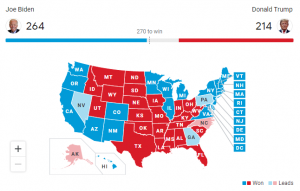 At 8:50, before I had quite finished The New York Times—and I think MSNBC was on the television—there came the extraordinary news that a significant tally had come in from Pennsylvania and then, before my very eyes, the Keystone State turned baby blue from powder pink. The reporter was so excited (and likely over-caffeinated) he could hardly manage his display.

Good start to the day. So I went out and planted the re-blooming iris and a bunch of snowdrop bulbs that had just arrived and spread out three bags of mulch.

Salvation may be at hand but not quite here. There will certainly be recounts; some margins are so thin that they could, as NBC’s Chuck Todd put it, simply represent a typo.

My Dear One came out on the deck to tell me, as I planted multicolor ajuga and blue chionodoxa in the garden below, that CNN had called the race for Joe Biden and Kamala Harris. I asked exactly what time it was. It was 11:15 am. A moment later he returned and said all the news outlets had called the race. I spread a few bags of mulch on the tended ground.

A little while later he dropped the phone down to me: it was my Tattooed Boy. I love that man. I love the fact that he knows when thing matter to me in a deep and visceral way and lets me know.

How long until January 20, 2021 and Inauguration Day? Ten weeks and four days. Plenty of time of Trump to carry out terrible mischief. This is where the system which has not restrained him much needs to tie him down.

In seventy-four days we take back the White House, the Constitution, our self-respect. Who knows exactly how much damage has been done?