Sometimes a book seems like it was written just for you. 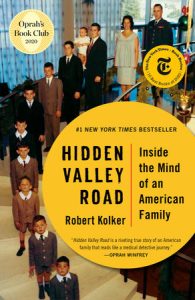 A review of Hidden Valley Road: Inside the Mind of an American Family (2020) by Robert Kolker caught my eye. Perhaps it was in The New York Times, maybe The New Yorker magazine. The book seemed like something my Dear One would like, given the roles played in his novels by dysfunctional and genetically doomed families.

The story focuses on the Galvin family, a family of twelve children. By the 1970s, six of the ten boys had disappeared into the dark hole of schizophrenia. Their four brothers and two sisters were all casualties of their illnesses in some way. Kolker summarizes the history of schizophrenia as a disease, lays out the “treatments” on which the medical and psychiatric establishments relied. The case study and genetic data the family provided to researchers and therapists struggling with the Nature versus Nurture question, is one of the great narratives of modern medical history.

Why would I find this any more meaningful than any other reader? In some ways, Kolker was telling my family history, too.

My mother, Priscilla, was first committed to a mental institution, Hannah Pavilion in Cleveland OH, when I was about eleven. That would have been in 1963. From there she was transferred to McLean Hospital in Belmont Massachusetts, My father, Cal, was dying from the effects of Type 1 diabetes and it was clear that we four children needed the supervision of our maternal grandparents.

As I started reading this book, I thought back over what it felt like in the 1960s to have a mother diagnosed mentally ill. She had made suicide attempts. She became anorexic for several years and aphasic as well, requiring that my sister and I speak for her in public and keep an eye on her when she was allowed out of the hospital. I thought in particular about the lingering myth of the “schizophregenic mother” and how often blame for a variety of ills has been laid on my maternal grandmother’s doorstep.

Treatments All Have Side Effects

Schizophrenia was one diagnosis proffered to explain my mother’s illness. She came within twenty-four hours of being lobotomized. (The plan was trashed by her older brother who went ballistic on hearing of if.) At Hannah Pavilion, Priscilla underwent a long course of ECT (electro-convulsant therapy) of the cruder kind. Coping with the way it erased her memories and some of her personality still looms in my memories. Medications and psychoanalysis vied with each other during her treatment at McLean.

Neuroleptic medications had innumerable side effects. Thorazine made Priscilla sensitive to the sun. I remember a summer excursion to Harvard Square with my mother and coming home to Belmont on the tram. The stop was just a couple blocks from the apartment, but my mother began to dance about and agitating to get home. In the apartment she bucketed to the bathroom and ran cold water in the tub to stand in, to cool her feet, to ease the burning and discomfort.

What is Wrong with my Mother?

Only once did my sister and I (then fourteen and twelve respectively) get the chance to discuss our mother’s illness with her doctors. (Our brothers were younger, too young.) It was not long after we arrived in Massachusetts. I remember a darkish office, I think the presence of my maternal grandparents, and a doctor or two. We were asked if we had any questions. I said, yes: “What is wrong with my mother.” The doctor spoke for about five minutes and provided precisely zero information about what was wrong with my mother.

It wasn’t a question they had the answer to.

Psychoanalysis and psychopharmacology both played a part in my mother’s recovery. So did time. So did so many family members and friends. Like the Galvin family who relied on the extraordinary resources of their friends Sam and Nancy Gary, we were supremely lucky that my maternal grandfather was a man of means able to finance boarding schools, summer camps, and, of course, the costs of my mother’s institutionalization.

Published in 2020, the story in Hidden Valley Road concludes in 2018. The timeframe of the Galvins’ lives matches with mine, from the time I was eight or nine to my mid-sixties. The final chapters serve as an epilogue, both for surviving family members and for key researchers. There was so much harm and there were such deep scars, emotional and professional.

But time gives it all context and distance.