We Are All History At the news of the death of Queen Elizabeth II, my mind went so many places. One of those places was my grandparents’ butler’s pantry. On one shelf, among odd sets, had been the set of coronation cups. “Who had them now?” I wondered and emailed my siblings and cousins to see if they knew.

My sister said she last saw them in a cabinet in our mother’s apartment at a retirement community in Massachusetts. I knew that had to be around 2005, at the time of Ma’s 80th birthday party. Turns out that brother Tim has them.

Ma’s people were famously Anglophile. During World War I, my Pop was a driver for the American Ambulance Field Service, attached to a French division starting in April 1917 and traveled to England on leave. On his return stateside in April 1919, he left many friends behind in both countries, relationships that endured for decades.

Pop enlisted as an officer during World War II and was stationed mainly at Bushy Park, near Richmond, Surrey, where his responsibilities included provisioning the troops and working on the logistics of the D-Day invasion. Before that, however, in 1940, he learned of the children being evacuated from London during the Blitz.

One afternoon, he took his youngest, my Uncle Nat, and drove to the New England Home for Little Wanderers in Boston from Hingham and picked up young David Douglas, who must have been about ten or eleven years old. Even after his return to England, David remained a member of the family.

Senior year in high school I applied for an Isabel Carden Griffin Exchange scholarship from the English-Speaking Union. During that year I spent the winter holidays with David, his wife Hazel, and their daughters Jody and Louise. I miss David and Hazel, but Louise and I share our news in our Christmas cards.

I made my own friends that year, of course. Samantha was my guardian in the upper sixth form at Princess Helena College, coaching me in the arcane ways of the English and sharing her parents and brother. She is my Tattooed Boy’s godmother and I am the honorary godmother to her son and daughter.

The Royal Family And I

My closest brush with the monarchy was at PHC’s Garden Party in June 1970. Our royal patron was Her Royal Highness the Duchess of Gloucester, aunt by marriage of the Queen. So much planning to be done—and I received a week-long tutorial from Miss Stratford, the Head of School, in the correct way to curtsey when I was introduced. And how to address the Duchess: “Yes, your Royal Highness, No, your Royal Highness, yes Ma’am, no Ma’am.” I did better with the meeting than the parting, when I half-fell over a chair.

In 2004, a squib in the paper caught my eye. Her Royal Highness, Alice, the Duchess of Gloucester had died just fifty-seven days short of her 103rd birthday. Surely, I thought, she had been at least ninety in 1970. Apparently not.

Keeping Up On The Windsors

When Lady Diana Spencer wed Charles, Prince of Wales, on July 29. 1981, in St. Paul’s Cathedral, my sister-in-law Emily, who lived only a couple blocks away, trekked over around five in the morning so we could brew a pot of tea and watch the royal nuptials. Like anyone not living under a rock, I was pretty well aware of the tribulations of the Royals: flawed marriages, divorces, alcoholism, tragic death.

When Prince William and Catherine Middleton tied the knot in 1911 at Westminster Abbey, after years of “will-they-won’t-they” speculation, I made more tea and settled in on my couch to watch. In 2018 when Harry and Meghan exchanged vows in St. George’s Chapel at Windsor Castle, I was there again. In for a penny, in for a pound. 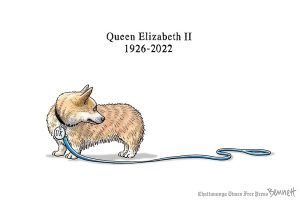 I felt the Queen’s terrible sorrow and isolation when she lost her husband of seventy-three years. Her bereavement, as she sat in Covid-enforced isolation during the funeral service in 2021, was palpable.

I recognized the look of abandonment and resignation on the face of Charles when he buried his mother. Whatever satisfaction he might have felt in finally ascending the throne seemed crushed by the awful burden of succeeding that remarkable, historical parent.

Other Points Of View

It is impossible to extricate the identity of the Queen, however, from that of the British empire and its heinous colonial crimes. Elizabeth’s official titles, in the United Kingdom at least, were “Her Majesty Elizabeth the Second, by the Grace of God, of Great Britain, Ireland and the British Dominions beyond the Seas, Queen, Head of the Commonwealth, Defender of the Faith.”

My dear friend Usha was born only a few years after India was granted independence on August 15, 1947. She feels nothing for the loss of the Queen except utter disdain for the racist, imperialist culture over which Elizabeth presided. Usha, a physician and a poet, sent me this bit of verse on September 9, the day after her death:

Supporters of republics, democracy and anti-monarchists of all kinds have expressed similar sentiments at least since the American War for Independence (1775-1783). The Founders were intent on ensuring that the government they designed would prevent the rise of an autocrat. No deity would have a hand in anointing the leader of the nation, nor would the office be handed on generation to generation.

As I mourn the passing of the Queen myself, I feel how profoundly anachronistic is the institution she passes on to her heirs. And to the people of her realm.

Elizabeth was born in 1926, a year after my mother. She became queen in 1952, the year I was born, and was crowned in 1953. The seventy years of my life exactly align with the years of her reign. In my quicksand life, she has been a constant.

My grandfather outlived the friends of his youth, the generation that followed them, and many of the next generation as well. My parents are gone and few survive of their cousins. I am now counted among the eldest in my family.

And Elizabeth II has passed from present day to past. She who marked so much history is herself now only history.

As we all eventually will be.