How To Bake π: An Edible Exploration of the Mathematics of Mathematics, by Eugenia Cheng. (Basic Books, 2015) is a disappointment.

Cheng is, I am sure, a fine mathematician and probably an excellent teacher, but she needs help writing, especially the help of a copyeditor. The jacket cover features lavish praise from five professors of math and one astrophysicist, but I seriously doubt any of them actually *read* the book. I suspect they flipped through pages, chuckled at the jokes they got, felt the pressure of supporting one of their own; they likely never noticed errors, infelicities, and missing bits. The index is largely worthless and many words I looked up were absent. Obviously Basic Books, in addition to being unwilling to shell out for a competent copyeditor was too cheap to pop for a qualified indexer. Nor is there a glossary of mathematical terms and the text desperately needs one. 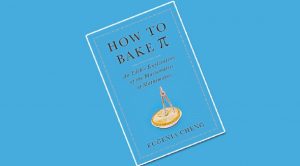 How to Bake Pi

I’m an art historian and not a mathematician. I did poorly at math in high school, took only statistics in college, and never went near physics. Yet as an adult (okay, a geezer of sixty-six) I am finding that math, among other disciplines outside the humanities, is interesting and that much of it is within my grasp–provided that I get a decent explanation of what is going on.

Cheng has a good idea here—teach math concepts by illustrating the ways that math is structurally analogous to so many things the average person may be more familiar with–especially baking.  But I don’t like the sound of any of her recipes (for which she provides amounts but not much else); I don’t share her passion for chocolate; I am still entirely unclear what “category theory” is. I get that it is the “math of math;” Cheng keeps saying that. But I don’t get what it is and more importantly why it is useful or important.

I can sort of follow most of her walkthroughs of theorems and algebraic things. In doing so I depend on what my father taught me in the seventh grade when I was utterly unable to grasp what the “new math” of the Greater Cleveland Math Project (GCMP) was about. For the record, my father, an economist who had done advanced work in mathematics, couldn’t figure new math out either. He said, “I don’t know what they want you to do but I can show you how to get the answer.” He explained that nearly every question (every search for some unknown, ‘x’ or answer) could be set up as a ratio. Cross-multiply and you get an equation that can be solved for x. That worked for me.

But this is about Cheng’s book and not how I learned math when I was twelve.

While I suspect Cheng was trying to make math and various concepts fun, lighthearted, even relevant, what she did for me was create huge amounts of frustration because she left things out, said things wrong, made mistakes.  For instance, on page 74 she writes, in her explanation of proof by contradiction, that “Now we know that a squared is two times something, which means it is an even number.” Well no. That’s not true. If you have an integer ‘a’ and square it, you multiply it by itself and not by two—unless, of course, the integer is two. If ‘a’ equals an odd number, then its square will always be odd, never even. This is the kind of error that the author should have cleared out and a copyeditor would certainly have caught. The typesetting and design of the book are also problematic. On page 274, the fraction 1/9 is followed so closely by a comma that I spent several minutes with my glasses off, peering at it and trying to figure out if I was looking at “one over nine followed by a comma” or “one over a nine with an illegible superscript.”

I’m sure the organization of concepts in the book makes sense to her but I felt like she was jumping all over the place, sending me off on tangents (that’s a little math pun) while promising that all would be explained at some point toward the end of the book.

Nothing about that is fun.

While reading How to Bake π, I started Walter Isaacson’s biography of Leonardo da Vinci. Oddly enough there was just as much math in that biography but it was math (discussions of squaring the circle, Hippocrates’ lune and so on) that I found truly exciting and way more easily understood.

I belong to an audience of math-ignorant and math-challenged types eagerly awaiting books that introduce them to math in interesting, compelling and graspable ways. Eugenia Cheng’s How to Bake π is not such a book.