As my Dear One and I strolled beneath blue October skies over gilded foliage, I asked if he thought Joe Biden would win the election. He said yes with a fair amount of confidence.

I think Biden will prevail, myself. That is certainly my hope. A Democratic victory seems more possible now than it did four years ago. Out of curiosity, I went into my blog and reviewed the posts that focused on Donald Trump as GOP candidate and as POTUS45.

Just the ones that focused on Trump mind you. Since August 13, 2015, when I first suspected that Trump just might win the election, I have written nine posts that deal with Trump explicitly. I reference him in dozens more, including the COVID-era series that with this one number twenty-one. Obsessed, you say? In all likelihood. 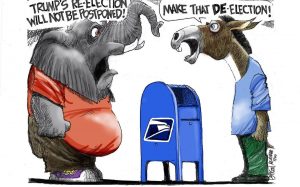 What worried me the most in those writings? The Supreme Court was at the top of the list. I knew that GOP success, particularly knowing that Congress was in their control, would prove devastating to human rights in this country for decades to come.

Right behind that I fretted that the theocrats in Congress and their wealthy backers would change a government of laws into a government of fundamentalist dogma. With the placement of Neil Gorsuch and Brett Kavanaugh on the bench and the imminent confirmation of Amy Coney Barrett, I see Margaret Atwood’s Gilead already here and there.. 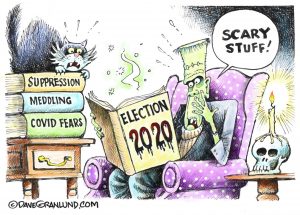 Trump and his cultists have methodically destabilized the State of our Union. ,He has empowered White Supremacists, celebrating their lethal violence against Black Lives Matter protesters. White Supremacist groups are told to “stand by” in his war on democracy and the American Constitution. Trump has feigned ignorance of QAnon while spreading their malignant lies in his Twitter feed and rallies.

I am not calm. I do not take comfort from the polls that show Biden with a two-digit lead nationwide. I can only hope that Mitch McConnell’s death grip on the Senate and the Judiciary and most functions of government is almost at an end.

The Way It Briefly Was

This evening we watched the Pete Sousa documentary, The Way I See It, his story of being the official White House photographer. That story began with Sousa’s work as a very young photographer in the Ronald Reagan administration in the 1980s and concluded with the transfer of government reins to Donald Trump. I cried all the way through it. Remember when the president and First Family were people you could admire even if you disagreed with the administration’s policies?

Will there be a peaceful transfer of power, just as there has been in every change of administration since John Adams succeeded George Washington in 1797? Not if Donald Trump has anything to do with it. 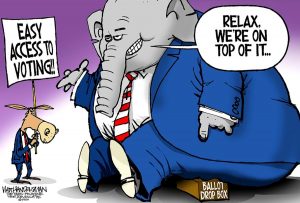 Trump started chanting “the election is rigged” in 2015. His exhortations have intensified. He has battered voters with a hurricane of lies that mail-in ballots are a national conspiracy to defraud him of office. His core followers are armed and seem to be preparing resistance to what they perceive as a Democratic coup.

For their part, the GOP have been assiduously suppressing voter turnout.

Then, of course, there is the matter of packing the judiciary. It’s been a strategy for Mitch McConnel, Lindsey Graham and the rest of the GOP since Barack Obama was sworn in on January 20, 2009. Both SCOTUS and Circuit Court benches now view the Constitution through the lens of reactionary politics and religious dogma. 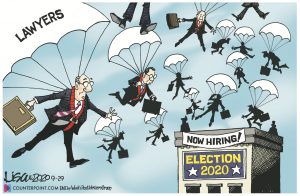